How Sweet it is 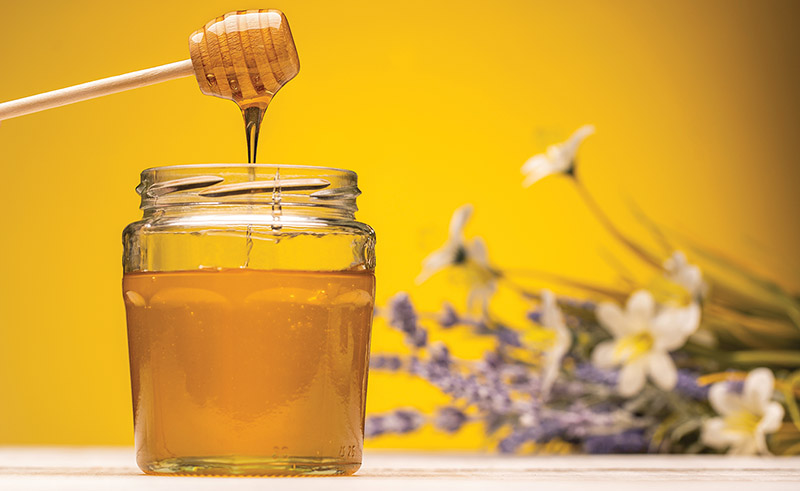 Honey is a delectable treasure that has been enjoyed all over the world for centuries. Its delicious and nutritious properties have long been referred to as, “The Nectar of the Gods”, for very good reasons. Honey was so sacred and sensuous to the ancient Egyptians, that they used it as an offering to their gods, as did the ancient Greeks. The queen bee was the symbol for the goddess, Artemis, and it is said that Eros (Cupid), the God of Love, dipped his arrows in honey before shooting them into unsuspecting lovers. Its richness was so valued that ancient Egyptians used it as currency, and marriage vows included a husband’s promise to provide his new wife with honey.

The ancient Egyptians also had the earliest record of beekeeping, around 2400 BCE, and they discovered how to use smoke to calm bees (modern science shows that this practice inhibits the bees’ chemical communication and prevents them from panicking). In the United States, we celebrate National Honey Month in September, because it marks the end of the honey collection season for many beekeepers.

The intriguing Honeybee has been making honey by the same method for about 60 million years. The female worker bee certainly lives up to her “busy bee” status, by visiting 55-100 flowers on a single trip outside of the hive. In fact, she can fly up to 6 miles, at 15 miles per hour, to meet her quota. She works continuously to extract the sugary nectar from blossoms, and then stores it in her “honey stomach,” which is a separate feature of her digestive tract, before returning to the hive. Once she is home, the nectar is chewed and transferred between bees until the final product is made. The rich and golden honey is then stored in honeycomb cells, which are sealed off with a wax covering to keep it pure.

To make one pound of honey, approximately 768 bees in the colony must collectively visit 2 million flowers, and fly over 55,000 miles in their lifetime. The Honeybee is also a master pollinator, which keeps our environment fruitful and abundant. It is safe to say, without the Honeybee, our ecosystem would quickly unravel.

Honey has always been highly regarded for its healing properties and is thought to help with conditions such as sore throats, digestive disorders, skin problems, and hay fever.

According to the American Journal of Therapeutics, a large number of clinical studies have confirmed that broad-spectrum antimicrobial properties are present in honey, which may be attributed to its acidity (low pH), and the presence of bactericidal factors, such as hydrogen peroxide. Bees deposit hydrogen peroxide into the honey as they ​synthesize​ flower pollen. This could explain why, for centuries, various cultures have used honey in wound care, and as a natural antibiotic. It also explains why microorganisms rarely grow in honey, and sealed honey does not spoil, even after thousands of years!

The natural fruit sugars in honey, fructose and glucose, are quickly digested by the body, which is why it gives us a natural energy boost.

Honey’s ability to attract and retain moisture makes it an effective beauty treatment. It was even a part of Cleopatra’s daily beauty ritual.

Honey is one of the few foods that contains pinocembrin, an antioxidant associated with improved brain functioning.

It is commonly used as a way to relieve allergies. When a person eats local honey, they are thought to be ingesting local pollen. Over time, a person may become less sensitive to this pollen, a bit like an allergy shot.

Cleopatra’s most famous beauty secret was her ritual of bathing in milk and honey. Both of these ingredients soften the skin and leave you smelling  sweet. Make your own version by creating a honey and yogurt face mask.

Apply to your face and let sit for 15 minutes. Use a warm washcloth
to wipe it off.

1 cup or more of hot water

Optional – You can always add a dash of whiskey for a Hot Toddy.

2 cups of your favorite nuts and seeds, chopped

Preheat the oven to 350°F and line an 8×8 baking pan with parchment paper, leaving the flaps over the sides, in order to lift the bars out of the pan, after they cool. Mix all the ingredients together in a large bowl. Spread the mixture into the prepared baking dish, pressing it down to reach all corners of the pan. Bake it in the oven for 15-20 minutes, watching carefully towards the end to be sure the honey isn’t burning. Remove it from the oven and let it cool on a wire rack for at least 30 minutes before cutting into squares.

*Honey should never be given to children under the age of one.

* Diabetics should watch their intake of honey, because it can raise their sugar levels.