Welcoming Summer with The Solstice

Summer is that dreamy time of year when the grandeur of nature’s beauty is in its most robust and verdant phase. The summer solstice, occurring around June 20th, is when the northern hemisphere gets to celebrate the longest day of the year, when earth’s axis is at its maximum tilt, and the sun reaches its highest point in the sky. For most of us this marks the beginning of long, sun kissed days, fragrant, fresh cut grass, dew-steeped flowers, fireflies, and warm, breezy nights.

Many cultures around the world have held solstice rituals for thousands of years to celebrate the renewal of light, the potential for a good harvest, and the abundance of life itself. I would say those are important reasons to celebrate! Here is some inspiration from summer solstice celebrations from around the world.

The Swedish celebrate the connection between the solstice and fertility by collecting summer flowers and herbs on the eve of the solstice, especially those believed to have potent medicinal properties to enhance fertility. These bunches are hung in doorways or left in water overnight, to wash with the following morning. In Norway and Sweden, it is believed that placing flowers under the pillow of a maiden will make her dream of her future love.

Show yourself some love this solstice by sipping on some tea blends with soothing aromas, and properties that support women’s health. I love red raspberry, chamomile, lavender, chasteberry, and rose. You can buy the herbs and flowers in bulk, and create your own tea bags to steep in hot water. You can also create larger herbal bags with cheesecloth and add it to your
bathtub for some extra luxury.

The ancient Romans celebrated the festival of Vestalia, in honor of the goddess of the hearth. Married women brought offerings to the temple of Vesta, hoping the goddess would bestow blessings upon their homes and families.

The solstice is the perfect opportunity to show gratitude for your home and honor it in a special way. A fun family project might be to make a summer wreath for the front door using dried, fresh, or artificial flowers.

In Northern Europe, pagans celebrated the occasion with bonfires, believing they banished evil spirits and demons, as well as cultivated magic. Bonfires are a recurrent theme across various cultures’ summer solstice celebrations, which almost always involved feasting and dancing.

Hopefully this coming solstice will be a perfect evening to sit around a campfire and enjoy its splendor and warmth . . . minus the evil spirits. Don’t forget the marshmallows!

The Sioux Indian Tribe celebrates the summer solstice with their famous Sundance taking place during the day. The Bighorn Medicine Wheel in Wyoming was designed to align with the sunrise and sunset during the solstice, where tribes would converge for sun gazing dances around a sacred cottonwood tree.

The solstice is the perfect excuse to let loose, dance, and celebrate life! There is nothing more liberating for your body and mind than moving in a way that feels natural and good. Jump around in your living room, take a belly dance class, or grab a date for some salsa dancing.

We can’t talk about the summer solstice without mentioning Stonehenge. It is perhaps the most famous ode to the equinox. Druids, a group of Celtic pagans, were long believed to have built Stonehenge around 3000 B.C. On the summer solstice, the sun rises behind the Heel Stone, the ancient entrance to the Stone Circle, and rays of sunlight are channeled into the centre of the monument.

Since most of us probably won’t be able to make it to Stonehenge this solstice, try to find your own outdoor temple to celebrate the dawn. Our beloved Blue Ridge Mountains are a perfect place to capture the magnificent rays of the morning sun. Bring a picnic and enjoy the splendor!

“The world begins with the coming of light,” wrote Jungian analyst, Erich Neumann, in The Origins and History of Consciousness. This is true for Yogis and Hindus who consider light as a symbol of consciousness and self-illumination. For thousands of years, the Hindus have revered the sun, which they call Surya, as both the physical and spiritual heart of our world. One way of honoring the sun is through the dynamic asana sequence, Surya Namaskar (better known as Sun Salutation). A good way to greet the morning sun and welcome the day ahead is to practice Sun Salutations. The basic postures of a Sun Salutation, in order of performance, are pictured below.. 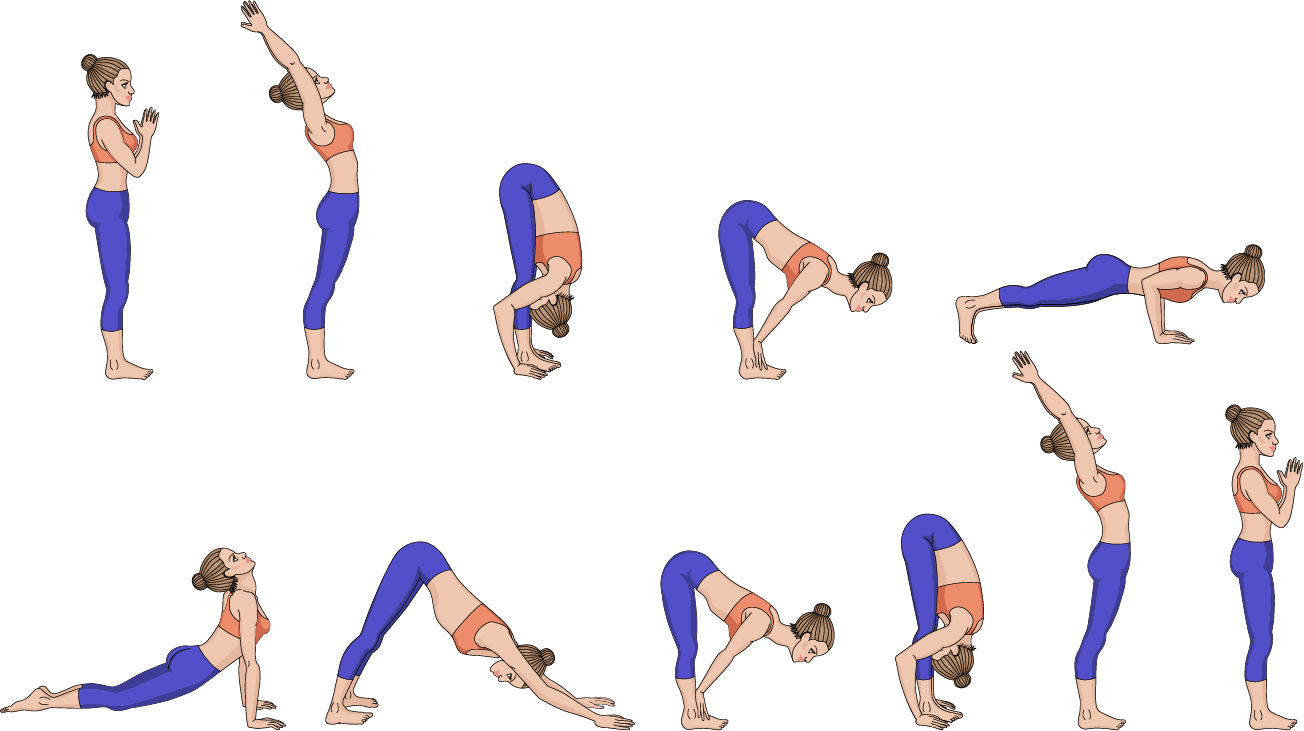